Home > What is shorinji kempo ? > Shorinji Kempo is a Discipline that Develops Individuals

What is shorinji kempo ?

■Shorinji Kempo is a Discipline that Develops Individuals

1. Through the technical practice of Shorinji Kempo, people gain confidence, courage, and vigor, and nature a spirit of compassion and a sense of justice.
2. This discipline is a gyo for developing individuals, and it brings the three benefits of self defence, spiritual cultivation, and improved health.
3. We think and act not only out of consideration for ourselves, but with equal consideration for others. In this way, we contribute to peace and well being society. 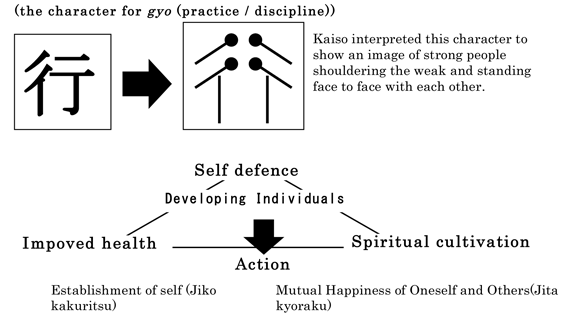 ◆A discipline that develops individuals and supplies three benefits
Shorinji Kempo does not take games of victory as its goal. When individuals become obsessed with victory and defeat, they tend to arrive at the wrong-headed idea that “so long as I am the stronger, that’s good enough”― and even start taking pleasure in the misfortunes of others. Shorinji Kempo was originated by Kaiso, Doshin So, as a simultaneously physical and mental method of practice for building character, a method through which one can gain three benefits: self-dence, spiritual cultivation, and improved health. Through techniques, one gains self confidence, courage, and vigor. One gains a spirit of compassion and a sense of justice. To cultivate such a person of true strength, Shorinji Kempo was created as a discipline, a gyo.

◆ Shorinji Kempo as bu 武 (martial practice)
The Chinese character for martial (the bu 武 in budo 武道) is an ideogram composed of the characters for “spear 戈” and “stop 止”. In other words, the significance of bu does not come from seeking out battle or wounding enemies, but rather from the ethical content of stopping conflict among people and from contributing to peace and culture. Budo is a greater path of disciplining oneself in techniques, of building up a self that is sturdy in both body and spirit; and at its core is a way to build up people who have the courage and abilities to stand up to injustice and corruption in the world. “Training myself, overcoming myself, invigorating others, I come to life myself.” Budo should be a path for one’s own sake, for the sake of others, and for the sake of society as a whole; this is what Shorinji Kempo aims for.

◆ The significance of Shorinji Kempo as a gyo
Kaiso said that the character for gyo (discipline), shows people (strong people) carrying children or old people (people in a position weakness) and
facing each other. In this spirit, Shorinji Kempo seeks to make a society in which the strong assist the weak, and all can live together happiness.
No person can live without others. Each of us relates to many others in the course of our lives. In the same way that we value ourselves, we need to value the people around us. In other words, our training in Shorinji Kempo has the following objectives: to build a self that is sound in body and spirit, and that can be relied upon (jiko kakuritsu); to act with the same kind of consideration for others as we give ourselves (jita kyoraku); The training is thus a gyo that develops individuals. In Shorinji Kempo the phrase “Half for one’s own happiness, and half for the happiness of others,” (“nakaba wa jiko no shiawase wo, nakaba wa hito no shiawase wo”) expresses the theme of mutual happiness for oneself and others. What we aim for is to become people who can contribute to the peace and well being of society.