On July 11-12, 2015, the Shorinji Kempo Unity hosted the Shorinji Kempo Unity study session in Coral Springs, Florida, the United States. We had 88 kenshi from America, Canada, and Japan participate. The instructor for this session was Kazuhiro Kawashima, Shorinji Kempo Unity International Instructor. Over the two days, we covered various items such as goho and juho based on the principles, applications of techniques with proctors, other techniques such as rakanappou, hokai lectures to learn Kongo Zen, practical seminars to improve as examiners and judges. We had two very productive and invaluable days.

The United States is a country with three time zones between the east and the west coasts, and it was a rare occasion that 30 branches gathered in one place together. We used this opportunity to hold a U.S. Federation Branch Master Meeting and Branch Master Qualification Certificate Seminar (7 individuals participated in the Qualification Certificate Seminar).

Prior to the study session, there was a special dan qualification examination conducted by Shorinji Kempo Unity, and 4 kenshi received their 4th dan certificates at the closing of the study session.

During the study session, we also had meetings concerning the World Taikai. This will be the first time the U.S. Federation will host a World Taikai. The Taikai will take place in 2017. More details will be available soon.

We thank the kenshi and the Branch Masters that joined us. We could not have a Study Session without them.
Also, we would like to express our gratitude to everyone in the South Florida branch who were so helpful with the event.

Thank you for forwarding your activity reports to the WSKO website. At present our website is under renewal. Unfortunately, we are unable to receive any future reports until this renewal process is complete. We apologise for any inconvenience this may cause.

Please bear with us for just a little while longer. We will let you know as soon as the website renewal is complete, so we can again receive and publish your reports.

Please note that articles received by WSKO already, will soon be uploaded. Again we thank you for your patience in this matter.​

DLI is regarded as the world’s largest and finest language school managed by the U.S. Federal Government (the Department of Defense). It is located in Monterey along the central coast of California. The school provides resident instruction in 24 languages and dialects courses to more than 3500 military and U.S. Government officials, 5 days a week, 7 hours per day with 2 or 3 hours of homework each night. There are more than 3500 military and U.S. Federal Government officials. Generally, students spend between 26 and 64 weeks at the school until the graduation, depending on the difficulty of the language.  (http://www.dliflc.edu/index.html.) I (Kazuki Arita) teach the Japanese language at DLIFLC. I used to teach Shorinji Kempo at the gym of DLI in 2005 before the branch was moved into Monterey town in 2006.

First, I briefly explained the philosophy of Japanese martial arts and Shorinji Kempo while emphasizing that the purpose is not for fighting or entertainment, but for education and better society. Then, we demonstrated Kihon from Kaisoku-Chudan, and Goho and Juho techniques in pairs.

Although it was a short-time, the audiences seemed to enjoy watching and but were very impressed with our big kiai and sharp movements. This year, the embu by Ms. Isabel Correia (6 years old) impressed all the audiences very much. When Isabel did Gyaku gote, they gave big hands to her.

To participate demonstration in public is a great experience and opportunity for them to have strong mind and spirit. They felt less nervous and could show techniques in the same way as they usually practice in the dojo if they train to have strong mind.

I really appreciate the participants’ precious time, effort, and great kindness to join in the demonstration. We plan to continue demonstrating Shorinji Kempo at DLI in order to help spread the name and philosophy of Shorinji Kempo and the Founder Doshin So in the U.S. Gassho. 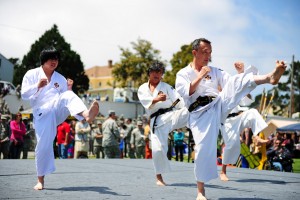 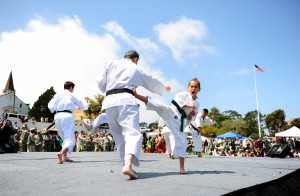 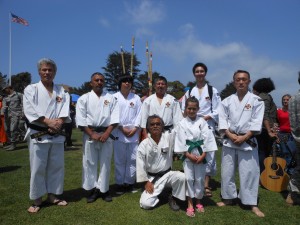 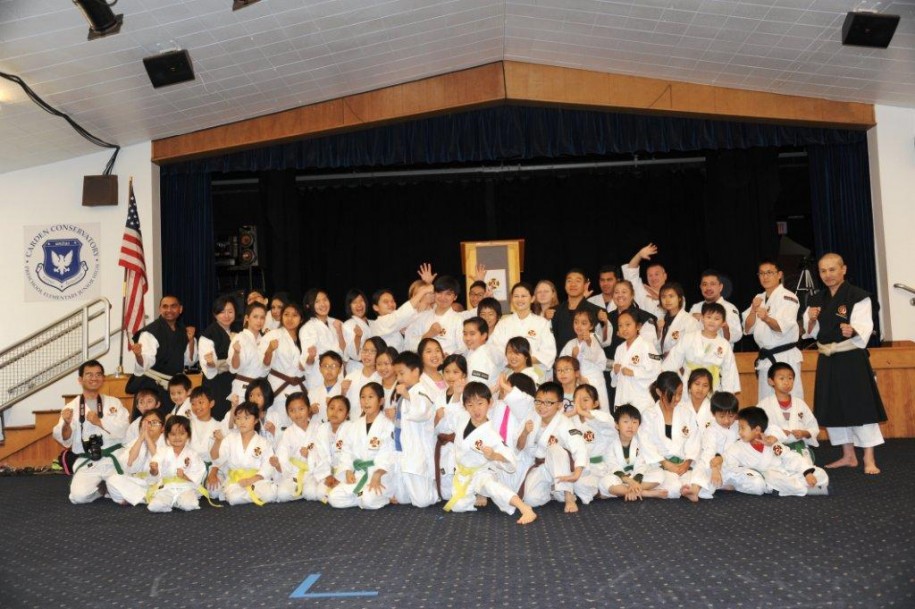 This article is dedicated to all students and families who continue to give back to the community we live in.  Orange County Shorinji Kempo Branch located in Southern California students (Kenshi) lives “Half’s for one’s own happiness and half for the happiness of others”. On May 2th, 2015   23 Shorinji Kempo students and parents volunteered their energy to clean and paint the schools bathrooms and lockers at Bethune middle school.  Bethune’s vision has many similarities to Shorinji Kempo. Bethune’s goal is to have parents and teachers working in harmony.  To raise students who are socially and academically aware for creating a better society.

23 Shorinji Kempo students and parents drove at 7:15am in a caravan of cars to Bethune Middle school. Upon arrival we checked in and received water, T-Shirts and energy bars.  Located in Los Angeles, Bethune middle school has several 2 and 3 story brick buildings that require cleaning from time to time. Mike H. and Lisa U separated over 100 volunteers into distinct groups to challenge numerous paint and cleanup projects.  Much to a pleasant surprise, the school hand painted some Shorinji Kempo banners for us.  The Shorinji Kempo students Team #2 cleaned several floors, classroom lockers, painted bathrooms and picked up debris inside and around the school.

The cleaning and painting moved like a perfect Kumi Embu (Pair Form) symphony of students, teachers and parents. Timing, accuracy, distance, speed and angle were some of the “key elements of Atemi” that described the 23 kenshi’s actions.   Speed seemed to be our biggest asset.  We completed many of the tasks in only a few hours.  Another great Shorinji Kempo community service event locked in time !!!! The pictures of the event speak for themselves.

The day ended with many of us going to the Avengers movie “Age of Ultron”.   We all have the power to change people’s lives in a positive way.  Students and parents lead by their actions which results in accomplishing great things in our community.  They are the ones whose actions truly speak louder than words!! The ones who lead by example for others to follow.

We are thankful for the many Shorinji Kempo students and parents who give back to the community through their actions!!  Connor, Dinh, Tammy, Mike, Lily, Lana, Thomas, Nicholas, Yukiko, John, Gaganjyot, Justin, Lauren, Nathan, Corbin, Yamanaka, Alexandria, Noah, Musashi, Sheri, Tri and Charles.

Mike and Lisa’s continued dedication to their Work, Family and Shorinji Kempo is one to be followed. 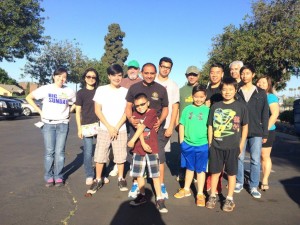 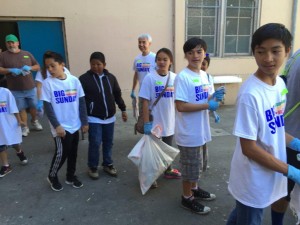 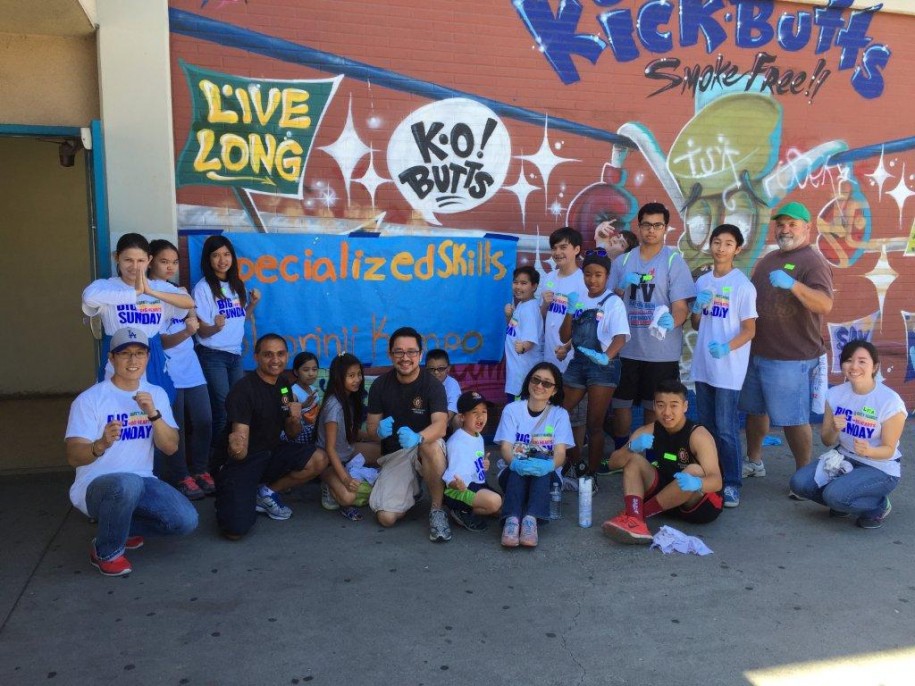 Once again, Shokema branch contributed to helping the martial arts gala ‘Amako’, a non profit gala for a good cause, that took part on the 25th of April. This year the money collected was given to ‘Los ángeles malagueños de la noche’, an association that feeds poor people in Malaga city. The participants of Shokema, that were led by Toni sensei, made an amazing and tecnical exhibition that included all the main aspects of our discipline. The exhibition took place in Carranque sport center in Malaga, where Shokema has lessons on Monday and Wednesday from 21.00 to 22.30. Shokema association also practice every week on Tuesday and Thursday from 20.00 to 22.00, this workshop is realized in the bulding of the local goverment council in the disctrict of ‘Bailen-Miraflores’. 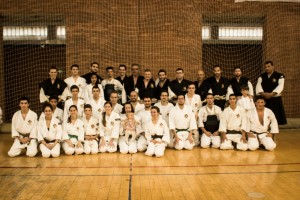 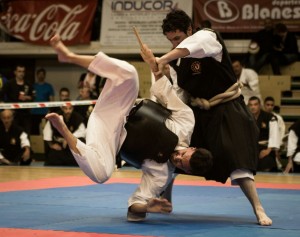 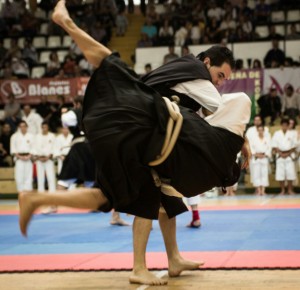 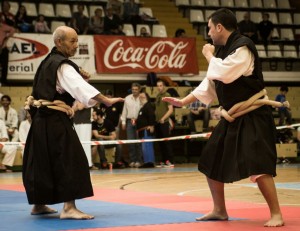 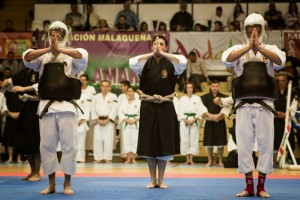 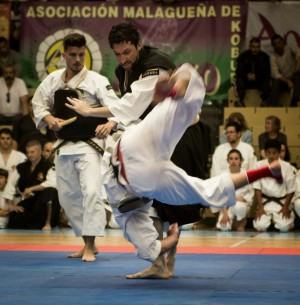 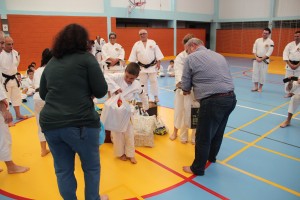 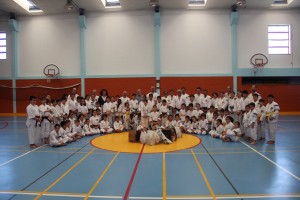 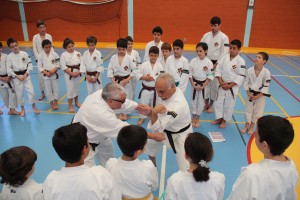 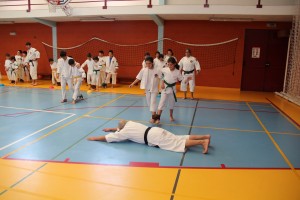 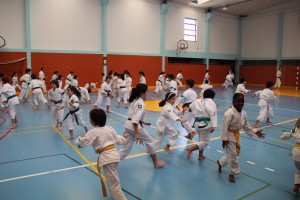 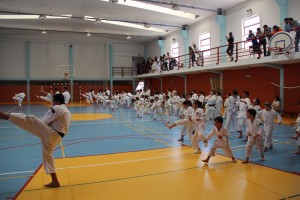 We have sent you WSKO Correspondence March, 2015 on March 22. If you have not received the e-mail, please contact the WSKO Secretariat.