Kenshi from Auckland Central Branch and North Shore Branch were invited to perform an embu demonstration at the 2017 Japan Day festival of Japanese culture held at The Cloud Events Centre, Queens Wharf, Auckland on 26th February 2017. The event is an annual celebration hosted by The Japanese Society of Auckland and the Consulate –General of Japan in Auckland. The event features Japanese martial arts, cuisine, art , music , dance and popular culture . 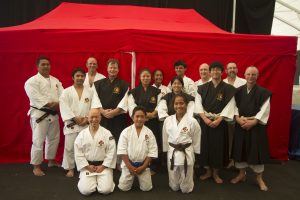 Kenshi from both branches had been preparing embus for about a month prior to the event and it was a great opportunity to show to the Auckland public a wide variety of embus including Dantai ( group embu) , senior men and women performing paired embu and  shakujo embu as well as  children demonstrating basic techniques. It was good to see a number of minarai kenshi who were prepared to demonstrate Tenchken Dai Ikkai in front of a large crowd. We wanted to show that Shorinji Kempo is a martial art which appeals to men , women and children of all ages. The demonstration was well received and as a result we received enquiries from people who were interested in joining Shorinji Kempo.

The participants in the demonstration were: